Please email me with any queries or commissions. 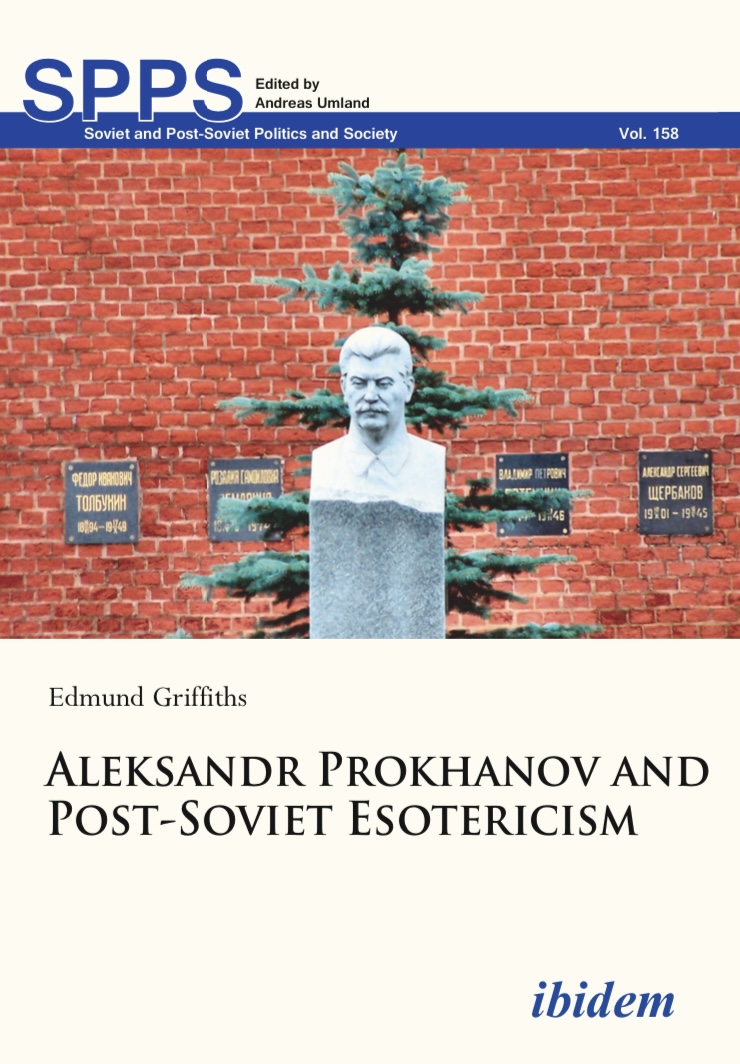 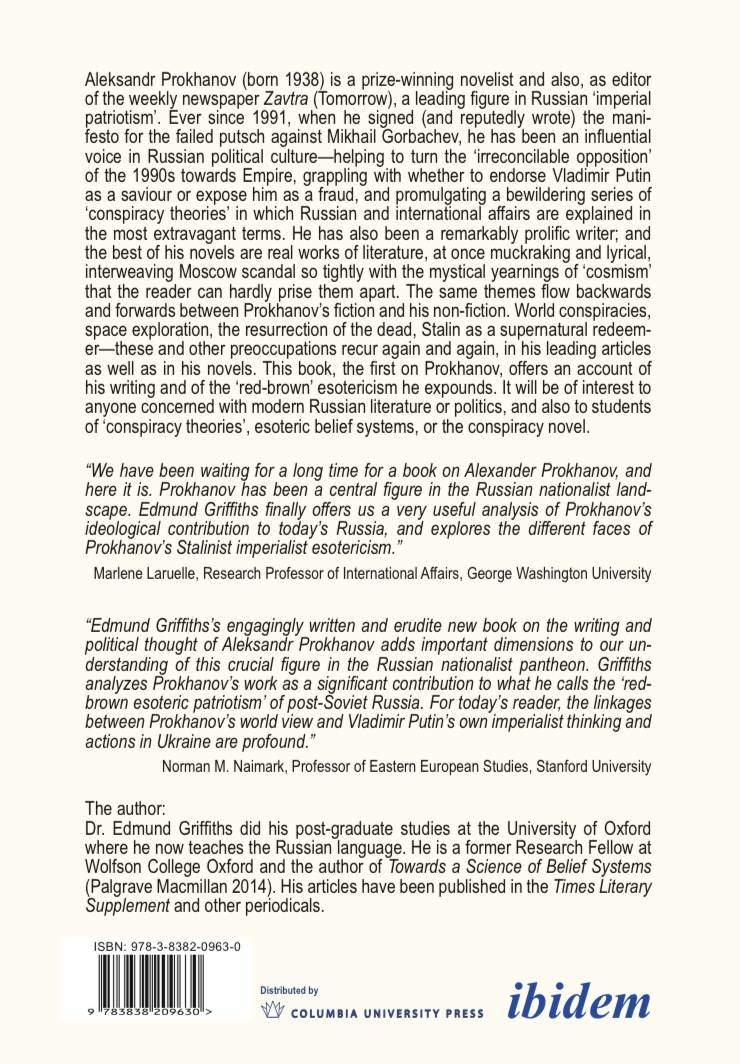 Aleksandr Prokhanov (born 1938) is a prize-winning novelist and also, as editor of the weekly newspaper Zavtra (Tomorrow), a leading figure in Russian ‘imperial patriotism’. Ever since 1991, when he signed (and reputedly wrote) the manifesto for the failed putsch against Mikhail Gorbachev, he has been an influential voice in Russian political culture—helping to turn the ‘irreconcilable opposition’ of the 1990s towards Empire, grappling with whether to endorse Vladimir Putin as a saviour or expose him as a fraud, and promulgating a bewildering series of ‘conspiracy theories’ in which Russian and international affairs are explained in the most extravagant terms. He has also been a remarkably prolific writer; and the best of his novels are real works of literature, at once muckraking and lyrical, interweaving Moscow scandal so tightly with the mystical yearnings of ‘cosmism’ that the reader can hardly prise them apart. The same themes flow backwards and forwards between Prokhanov’s fiction and his non-fiction. World conspiracies, space exploration, the resurrection of the dead, Stalin as a supernatural redeemer—these and other preoccupations recur again and again, in his leading articles as well as in his novels. This book, the first on Prokhanov, offers an account of his writing and of the ‘red-brown’ esotericism he expounds. It will be of interest to anyone concerned with modern Russian literature or politics, and also to students of ‘conspiracy theories’, esoteric belief systems, or the conspiracy novel.

“We have been waiting for a long time for a book on Alexander Prokhanov, and here it is. Prokhanov has been a central figure in the Russian nationalist landscape. Edmund Griffiths finally offers us a very useful analysis of Prokhanov’s ideological contribution to today’s Russia, and explores the different faces of Prokhanov’s Stalinist imperialist esotericism.”
— Marlene Laruelle, Research Professor of International Affairs, George Washington University

“Edmund Griffiths’s engagingly written and erudite new book on the writing and political thought of Aleksandr Prokhanov adds important dimensions to our understanding of this crucial figure in the Russian nationalist pantheon. Griffiths analyzes Prokhanov’s work as a significant contribution to what he calls the ‘red-brown esoteric patriotism’ of post-Soviet Russia. For today’s reader, the linkages between Prokhanov’s world view and Vladimir Putin’s own imperialist thinking and actions in Ukraine are profound.”
— Norman M. Naimark, Professor of Eastern European Studies, Stanford University

Argument for a bourgeois recreation (10)
in Talks

Wonders of the visible world: the politics of the Salem witch trials
in Talks

Why are goblins scared of iron?
in Talks

Why doesn’t Robert Temple think the Dogon were ever visited by aliens?
in Belief systems and descriptive logic

The Great Leap over the institutions
in Politics and socialism

Some remarks on the etymology of literary Martian
in Essays

Towards a Science of Belief Systems

People believe in a great many things: the New Age and the new atheism, astrology and the Juche Idea, the marginal utility theory and a God in three persons. Yet most of us know almost nothing about why other people believe the things they do—or indeed about how it feels to believe them. This book presents an objective method for understanding and comparing belief systems, irrespective of their subject matter and of whether or not the investigator happens to agree with them. The method, descriptive logic, is illustrated through analyses of various phenomena, including Zoroastrianism, Dawkinsism, Fabianism, 9/11 Truth, ‘alternative’ Egyptology, Gnosticism, flying saucer sightings, and the hymns of Charles Wesley. Special attention is given to beliefs that are not supposed to be wholly believed, and to how descriptive logic relates to the materialist conception of history. The book also outlines a new theory of superstition.

Table of Contents
Introduction. The Idea of a Science of Belief Systems
1. You Don’t Know What It’s Like!
2. A Descriptive Science of Logic
3. Some Notes on Affect
4. Elements of Comparative Method
5. Belief Systems and the Materialist Conception of History
6. Beliefs That Are Not Supposed To Be Wholly Believed
7. A Theory of Superstition, in Thirteen Paragraphs
8. Believing in Fictional Beings
Instead of a Conclusion
Appendix. The Use of Symbolic Notation in Descriptive Logic
Bibliography
Index

I am available as a freelance translator from Russian into English. Please email me for more information or for a quote.

‘The Spider’, by Maxim Gorky

Why doesn’t Robert Temple think the Dogon were ever visited by aliens?

And I’ll tell you no lies

A prophet of Baal

Some more lines for Bold Slasher

When the state has withered away

My poems are not real poems


All poems on one page

Israel is my washpot: politics in ancient Moab
11 April 2019

Mysteries of the Himalayas: the hidden Masters
30 May 2019

No saviour from on high: the search for extraterrestrial intelligence
18 June 2020

Mysteries of the deep: the Flying Dutchman
13 August 2020

Come, thou long-expected Jesus: the Left Behind novels
17 December 2020

Who built the pyramids? The appeal of alternative history
19 August 2021

Wonders of the visible world: the politics of the Salem witch trials
5 May 2022

An anonymous translation of the last few lines of the Bacchae

Henry Jenner and the natives of the Midlands

The sound that people expect the letter i to make

Some remarks on the etymology of literary Martian

Elements of the classic whodunnit

Rough notes towards The Modern Discorsi

Some criteria for assessing how democratic a system is

Factionalism at the centre, confusion in the branches

The transition from elective monarchy to hereditary monarchy

Inaction as a weapon in factional struggles

On giving the membership things to do

The Great Leap over the institutions

On not mentioning the war

JsSSEM
Emulates the first modern computer, the Manchester SSEM of 1948

‘Instead of analysing his dreams...’

‘I think I actually preferred it...’

You can get in touch with me by email or on Twitter.